Why have anti-5G campaigns been so successful?
Feb 18, 2021 by Martin Sims

For decades individuals and organised groups have lobbied against mobile phones claiming health risks, but the recent anti-5G campaigns have had an unprecedented impact. Messaging penetration has been estimated at 50% and never before have these campaigns led to arson attacks on base stations. In this Research Note we examine one reason for their success: the emotional power of the campaigns.

Until last year campaigns about health risks associated with mobile phones have used orthodox and lawful means but the arson attacks against 5G masts in several countries in 2020 marked a departure from accepted forms of non-violent protest.  The anti-5G campaigns were so powerful that they inspired a small number of people to break the law and risk a custodial sentence.

Public opinion surveys showed the traction that the anti-5G message was achieving. A consumer poll in May 2020 found a fifth or more adults in six out of 14 countries surveyed agreed with the statement “I believe there are health risks associated with 5G” (figure 1). This is despite advice from the World Health Organisation and International Commission on Non-Ionizing Radiation Protection (ICNIRP)  that there is no conclusive evidence of adverse health effects from mobile phone usage if safety standards are followed. 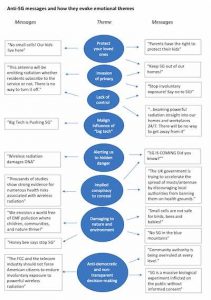 The feeling of “uncertain times” created by the coronavirus epidemic, along with widely shared claims on social media that it was caused by 5G, certainly played a part in motivating the attacks. An April 2020 survey by UK regulator, Ofcom, found that 50% of respondents had seen false or misleading statements about 5G.

However, in this Note we focus on the content of the anti-5G campaigns, seeking to establish the lessons that can be learnt for those that seek to reassure the public.

A key element of a successful campaign is its ability to connect with the target audience on an emotional level – does it stir “gut feelings”?

This was a prominent feature of anti-5G campaigns, which evoked strong emotional themes linked to powerful pre-existing narrative themes. We identified eight of these themes and explain their persuasive power below:

The campaigns studied were produced by four anti-5G groups :

The thumbnail diagram above gives examples of the messaging used by the anti-5G campaigners and how they evoked strong emotional themes.

The picture painted by the anti-5G messaging is of people who value nature and family living happily in local communities. But they are being attacked and need to protect their loved ones (“No small cells! Our kids live here”). The privacy which is key to their sense of security as individuals and families is threatened (“Keep 5G out of our homes!”). This is a malign and insidious force which they will not be able to control (“Stop involuntary exposure! Say no to 5G!”) and which is aligned with increasing technological automation and powerful business interests. (“Big Tech is Pushing 5G”).

The campaign is trying to help and protect local communities by alerting us to this hidden danger (“5G IS COMING Did you know?”). There is an implication that information has been concealed or withheld (“Thousands of studies show strong evidence for numerous health risks”) and that the natural justice we would expect from democratic institutions is being by-passed (“Community authority is being overruled at every level”).

Furthermore, this is a serious issue not just for human beings but for the natural environment with which we should have a harmonious relationship. (“Honey bee says stop 5G”)

Linked together, these themes tell a powerful story, another aspect of successful campaigning.

The campaigners cast themselves as Robin Hood or Superman figures, trying to save their communities from the “bad guys”. Their portrayal of 5G and the “Big Tech” forces behind it has echoes of the Superman enemy, Lex Luther, portrayed as both a mad scientist and owner of a huge corporation. The need to alert governments to hidden dangers perpetrated by powerful figures is also a familiar narrative theme, similar to Batman’s relationship with the mayor of Gotham City.  The need to live in harmony with nature and the apocalyptic consequences of failing to do so is a storyline in many films, such as Waterworld and Interstellar.

It is notable that the anti-5G campaigns present themselves as both the victims and heroes, a common theme of conspiracy theories.

Not everyone is convinced

However, not everyone will decode anti-5G messages in the manner suggested above, depending on their own values and life experiences. To take the example of the UK, the surveys described above also show that while anti-5G campaigns achieved wide recognition, their persuasive power was limited.  Those that thought 5G didn’t have health risks were in fact the biggest group: 61% compared to 14% who thought there were risks.[8] As 50% of respondents has seen anti-5G messages we may conclude that 36% were not convinced.

Anti-5G campaigns seek to evoke pre-existing narratives with powerful emotional resonances, giving them a strong impact on some audiences, but not all. For example, those who do not accept the anti-5G lobby’s claims of health risks are likely to regard the emotional messaging as deceitful rather than persuasive.

Emotional impact and and a strong narrative are key ingredients in winning someone over, and the anti-5G campaigns score highly on both,

They appeal to widely accepted values: family, selflessness, care for others, community, kindness, fairness, democracy, due process; values which emphasise morality and humanity. This is in sharp contrast with values often cast as representing the opposite: speed, efficiency and technology. This are the typically the focus of industry messaging, which we will consider in more detail in a later Note.

The spread of industry campaigns on 5G could equally well include the use of emotion and narrative to celebrate humanity and morality, but generally they don’t. This allows the anti-5G camp to monopolise these very powerful campaign tools.•