In the early 2010s, as 4G networks were being rolled out globally, while a few maverick researchers dreamed that 5G might use frequencies above 6 GHz, perhaps even “mmWaves” such as 28 GHz.

It’s a similar situation now. As of 2020, 5G networks are being deployed and some researchers are wondering what 6G will entail and what spectrum it will use. The answer, some say, is “terahertz frequencies”, above 95 GHz.

As we set out in a new research note, several standards bodies and research institutes around the world are investigating how the spectrum could be used. Some countries have already made these frequencies available in various non-exclusive ways. Last year’s WRC-19 also introduced some non-passive allocations into the THz spectrum.

The range of bands under study is shown in the table below. 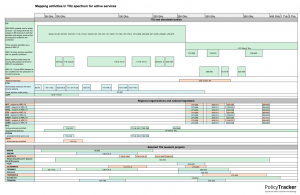 Several of these researchers will make their cases at PolicyTracker‘s next webinar: 6G Visions, Challenges and Opportunities.

The webinar, to be held on July 29, will feature a prestigious group of researchers from the US and Europe, as well as a representative from the European Commission. The speakers will discuss their visions of 6G, and what spectrum policy can bring their visions to life.