The new iteration of the PolicyTracker Spectrum Database (PSD) takes into account over 10,000 MHz of new or changed national spectrum assignments.

The COVID-19 pandemic may have put several imminent spectrum auctions on ice, but the first three months of 2020 had already seen an enormous amount of spectrum put under the hammer. 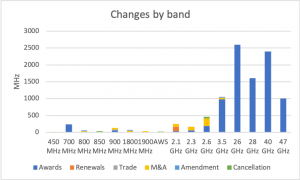 Below 6 GHz, 1550 MHz of spectrum has been awarded. This includes four awards of the 700 MHz band and the 3.5 GHz bands across six countries: China, Denmark, Hungary, Iceland, Taiwan and Thailand.

The US mmWave auction gained attention for the quantity of spectrum made available, but Taiwan’s auction is also notable for the large prices paid for the 3.5 GHz band. Despite the regulator’s attempts to calm the bidding, the band sold for the equivalent of $0.70/MHz/POP. 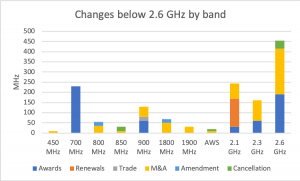 Although most of the changes to the database arose from awards, assignments for 932.8 MHz of spectrum were down to other factors, predominantly in bands below 2.6 GHz.

Three mergers also completed in the first quarter of 2020: Vodafone Malta’s sale to Monaco Telecom, Tele2 Russia’s takeover by state-owned Rostelecom and the long-awaited merger of T-Mobile and Sprint in the US. 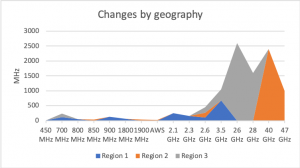 The PSD tracks changes to global spectrum allocations and assignments from auctions, beauty contests, renewals or the results of trades. It is updated quarterly and is available as part of our Spectrum Research Service.•