Asymmetry and the capacity crunch
Jun 17, 2011 by Richard Womersley

The asymmetry of mobile data might point to alternative bandplans for mobile spectrum, but is it too late to do anything about it?

At the 6th European Spectrum Management conference in Brussels this week, a number of speakers focussed on the difficulties which are caused by the asymmetry of mobile data, as well as on possible solutions for it.  The problem is this: the vast majority of use of the Internet is asymmetric, and in particular the amount of data which users download is much greater than the amount of data which users upload.  This has been recognised at a European level. Early drafts of Europe’s Digital Agenda cited the need for 30 Mbps, symmetric connections. But the published version now only talks about 30 Mbps download speeds and reference to symmetry is gone.  The asymmetry of mobile data is acknowledged within the majority of broadband radio standards which almost universally offer faster downlinks to uplinks (LTE for example, has a maximum downlink connection speed of around 100 Mbps but a maximum uplink of speed of only 50 Mbps).  Of course, part of the reason for this is the difference in quality of connection supported by the weaker signals transmitted from handsets compared to base stations, but you can be sure that those who develop the standards would have tried harder to make uplink and downlink speeds more evenly balanced had they believed there would be a need to do so.

But the extent of the asymmetry is being shown to be much greater than the 2:1 ratio inherent to the standards.  Plum (in some work done for Qualcomm http://www.plumconsulting.co.uk/pdfs/Plum_June2011_Benefits_of_1.4GHz_spectrum_for_multimedia_services.pdf) indicated that the downlink to uplink asymmetry is in the ratio of around 8:1 and other studies put the figure as high as 10:1.  Streaming video (seen by many as one of the major consumers of Internet bandwidth in the future) is almost unidirectional. 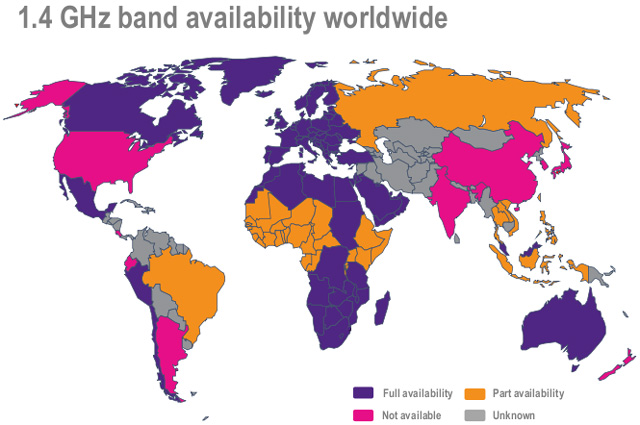 With the exception of spectrum being used for TDD purposes, all currently licensed mobile FDD spectrum is split 50:50 between uplink and downlink.  Qualcomm were touting their proposed supplementary downlink to add capacity for downloads using the 1.4 GHz spectrum they won at auction in the UK (and which is still available in most other countries in the world due to it being officially set-aside for L-Band DAB services which have not taken off).  Even the European Broadcasting Union (EBU) were keen to highlight the potential additional downlink capacity that broadcast networks could offer if they worked more closely with mobile operators (instead of being at loggerheads with them over the valuable UHF spectrum they inhabit).

But this smacks of a case of ‘closing the gate after the horse has bolted’.  If the asymmetry of data is really 8:1, and technology has an inherent built in disparity of 2:1, it seems logical that there should be around 4 times as much spectrum given over to downlink compared with uplink.  Within existing mobile bands (eg 900, 1800 and 2100 MHz) there is little to no scope to do things differently, but have regulators made a boob in thinking about how to split up new bands?  The Digital Dividend (790 to 862 MHz) is currently split into 2 symmetric blocks of 30 MHz plus the necessary guard bands. A 4 to 1 split would instead have suggested that 12 MHz should have been given to uplink with 48 MHz used for downlink.

The situation at 2.6 GHz is even more acute.  As it stands, there are 2 equal blocks of 70 MHz (plus 50 MHz of TDD spectrum).  Surely this should have been more like 30 MHz uplink and 120 MHz downlink with TDD squished in the left over bits (which could also be used as downlink only).

Of course, proponents of TDD technologies would argue that their services have the flexibility to re-assign up and down link capacity on an ‘as needed’ basis and that the correct solution would be to assign all new spectrum for TDD use. But this may not be efficient, as the need for additional 5 MHz guard bands between operators would reduce the effectiveness of the arrangement.  One of the most beneficial uses for TDD spectrum (and one which gets around the need for 5 MHz guard bands) would be to use it only for downlink.  If all base stations spent 100% of their time transmitting and 0% receiving (a perfectly valid combination for a TDD network), guard bands become unecessary and the TDD system becomes downlink only, which is kind of win-win for both FDD and TDD operators.

Ironically, in the UK, Ofcom’s initial proposals for the auction of the 2.6 GHz band could have yielded results in which the amount of FDD spectrum was not 2 x 70 MHz as per international norms, but that this could be reduced in favour of assigning more spectrum to TDD.  One of the flaws in this design was the need for inefficient guard bands between FDD and TDD networks (and between TDD and other TDD networks).  But if these TDD blocks were downlink only the guard band problem goes away and the auction could have yielded the kind of 4:1 split in downlink and uplink spectrum that may be necessary – it would have at least opened up the opportunity for asymmetric up and downlink assignments.

So what can be done?  As things stand very little.  Current arrangements will inevitably lead to inefficiencies where uplink spectrum is underused compared to downlink spectrum.  Perhaps using the 1.4 GHz band or using broadcast networks to provide additional data capacity might help a bit, but unless the realisation that asymmetric allocations are necessary takes hold quickly amongst policymakers, we will be left with suboptimal allocations that will inevitably lead to poorer or more expensive services as operators use other methods to solve the capacity crunch.  Perhaps any ‘Digital Dividend 2’ should be downlink only (a.k.a. broadcast) to redress the balance a little – now there’s a thought…