Using the MHz per pop sheets

The MHz per pop data is contained in this sheet:

The MHz per pop sheets show both  a historic figure using the dollar exchange rates at the time and a current figure, using  this year’s exchange rates. 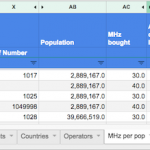 Depending on the project you may prefer to use the historic or the current exchange rates:

You may prefer to cross reference by comparing both sets of figures.

Revealing all the data

Some of the columns in both MHz/pop sheets are hidden to show the data in the simplest possible form. You can unhide these to reveal the figures on which the MHz/pop calculations are made.

Much of the information contained in the LICENCES sheet (details about the frequencies sold and technologies used) is duplicated for your convenience in the MHz/pop sheets and can be revealed by unhiding all columns A-V.

Columns Y-AF show the following data not found elsewhere in the spreadsheet and used to make the MHz/pop calculations:

The historic and current exchange rate data on which the MHz/pop calculations are made is available in a separate sheet called EXCHANGE RATES.

Please note that some licence prices were quoted in Euros before the official introduction of the currency in 1999. In these circumstances we use the ECU exchange rate for the relevant year.