There is an old folk take of a tourist on a driving holiday in Ireland, stopping a farmer and asking him how to get to the nearby town.  His answer is, “If I were you, I wouldn’t start here”. The same may be true for the regulatory journey that policy over UHF spectrum is now on.  Would we really continue our journey from where we are today, or would we, could we, start again?

The recent moves by African and Middle Eastern countries at WRC-12 to release spectrum at 700 MHz for mobile broadband services in Region 1 (EU/ME/Africa) seems to me to be a perfect example.  The issues which these countries were trying to overcome is that the 800 MHz ‘digital dividend’ that the European countries have instigated is in use in many non-EU countries for CDMA networks, working in the different 800 MHz band as is usually used in Region 2 (the Americas).  This Region 2 band is largely incompatible with the European digital dividend, and to some extent with the original GSM 900 MHz band and thus a more suitable alternative has been proposed. The problem now, is that the 700 MHz digital dividend band plan, as proposed by Region 3 (Asia) is not wholly compatible with the 800 MHz Region 1 digital dividend.  And talk has begun of the possibility of a 600 MHz ‘third’ digital dividend at some future date.

The situation (in spectrum terms) is shown in the diagram below.

The above does not even begin to consider the wider international harmonisation problems occurring from the fact that North America has adopted a different 700 MHz band plan to most other countries.  This lack of harmonisation, together with the proliferation of bands, is a headache for mobile manufacturers who have to try and cram all of them into handsets in order to produce ‘world phones’ with the widest possible market, and largest economies of scale.

I the words of my Irish farmer friend, “I wouldn’t start here”, and I believe he is right.  At the recent EU Spectrum Management conference, Richard Marsden of NERA suggested that, “perhaps the time has come to consider aligning mobile bands across all three ITU regions”.  Further, I would argue that it makes sense if the use of all UHF frequencies from 450 to 960 MHz were also harmonised internationally.

Where would I start?  I’d consider where we are most likely to be in say 15 to 20 years time.  In this time-frame, broadcasting will be almost exclusively HD, 3D and maybe even UHDTV will be with us meaning that terrestrial broadcasting networks will not be able to support the multitude and variety of television channels that will exist.  The terrestrial broadcast network may still be a suitable means of delivery of content in some (smaller) countries with fewer channels, but in general it will be replaced with cable, IPTV over fibre, and satellite, all of which are capable of delivering higher bandwidth services.

Public safety users will be on networks that use LTE (or whatever comes after it) and will be using a combination of commercial networks and their own networks to provide resilience and continuity in times of emergency or disaster.  These ‘blue light’ networks may have bespoke spectrum, but may share this with commercial networks much of the time, using licensed spectrum access or some similar approach to ensure that they can gain access at a moments notice when needed.  Similarly, business radio users will have migrated to digital networks such as LTE and won’t need dedicated spectrum.

Short range devices will all be ‘cognitive’ using geo-location databases to select unused frequencies and will be designed to be able to sit inside and within all manner of other users (including wireless broadband) and will share spectrum with pretty much anyone. 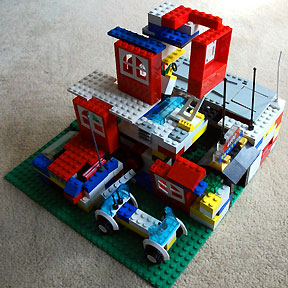 What will the band plan look like?  If we continue the way we are going today, it will look something like this Lego house that my son, Jamie, and I built to help illustrate the situation.  The bands from 450 to 960 MHz will have been lashed together in a very haphazard way to produce something akin to a contiguous block.  Like our construction here, at a distance it will look like a house, but one built piecemeal with extensions being added willy-nilly as new spectrum bands become available.  It will look house shaped, but on closer inspection it will be clear to see that it is just be a series of blocks randomly joined together to form the impression of a house.

Instead, we need to be laying down some firm foundations.  Rather than slowly adding pieces of spectrum one by one, how’s about architecting a plan for the future, and when new pieces of spectrum become available, using them in a way that will eventually lead to a properly integrated and harmonised band plan.  This would require enormous regulatory upheaval both at the regional and international level but if it’s not done now, we risk a fragmented, inefficient, future.

It needn’t be complicated.  The diagram below shows the basic tessellating structure for each adjacent band.

This might seem a little fanciful, but if such a grandiose plan as this is not agreed upon some time soon, we are going to be left with a real mess.  I leave the last word on this to my son who, upon seeing the house, said, “I don’t think people would live in a house like that, it’s a haunted house where ghosts would live!”