As Loon’s balloons wind down, what are the prospects for HAPS business models?
Feb 02, 2021

Every new generation of mobile technology is met by opposition from people who claim its radio waves cause adverse health effects.

5G has been no different. The devices and spectrum may vary, but the fears are the same.

Rollouts have faced particularly strong resistance from local councils who are trying to stop mobile operators from deploying 5G in their municipalities.

Villages and towns around the UK have seen a rise in the number of citizens—sometimes encouraged by local politicians—who reject 5G. 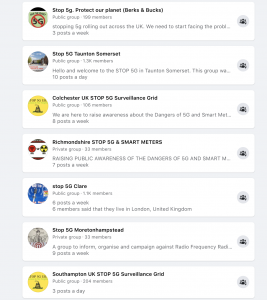 In other countries, the situation is similar. Very specific groups of citizens and towns in the Netherlands or Belgium have been opposed to the advent of 5G, suggesting these fears could be a localised phenomenon.

To tackle problems like these—which according to the ITU could genuinely hinder 5G rollout—agencies and mobile organisations have reiterated there is no reason to be alarmed about the effects of radiofrequency waves on our health.

UK regulator Ofcom worked with the government last year on a guide to 5G which was distributed to local authorities.

“This is designed to highlight the facts around 5G and provide reassurance on any health concerns,” an Ofcom spokesman told PolicyTracker. “We also handle correspondence on this issue from people across the UK.”

Despite these efforts, 5G and EMF remain a subject of fierce controversy.

Sceptics include not only conspiracy theorists, environmental activists and celebrities, but also scientists. A recently-published academic paper, for example, urged governments to stop 5G deployments until further studies are conducted.

Perhaps most worryingly, a Deloitte study showed a fifth or more of adults in six out of 14 countries surveyed agreed with the statement: “I believe there are health risks associated with 5G”.

So what has gone wrong? Why are so many people concerned? Is this a local problem or a global threat?

What has been different about 5G is that it is now easier than ever to share misunderstandings and false claims about its health impact.

Search engines also direct people to sites that inflame their own suspicions, while social media connects them with like-minded individuals, fuelling their fears.

So what would a successful 5G information campaign look like? Is there anything that mobile operators, vendors, regulators, government bodies and scientists can do to counter these claims?

Join PolicyTracker on Wednesday, February 3 at 3 pm GMT/4 pm CET/10 am EST for a virtual deep-dive conversation to explore policy proposals and practices that could be effective in combating this misinformation.

PolicyTracker Blogs
The power of anti-5G messages: emotion trumps the facts
Why have anti-5G campaigns been so successful?
Russia charts its own 5G spectrum strategy
Poll: anti-5G groups are better at campaigning than the wireless industry
Strategic advice on EMF messaging
More from blog...