Are regulators storing up problems for the future?
Jan 28, 2015 by Richard Womersley

A recent report by LS Telcom (which I have to admit to having had a hand in writing), highlighted the fact that many countries around the world have yet to make available all of the spectrum that the ITU has identified for use for commercial wireless broadband services (which the ITU calls IMT). Yet, despite this fact, the IMT community (e.g. the mobile operators and manufacturers) are pushing to be given access to even more spectrum. It seems churlish of the IMT community to make such demands when they haven’t even used the spectrum they have already asked for. This is not a case of Oliver asking for more gruel because his bowl is empty – the bowl is still half full! 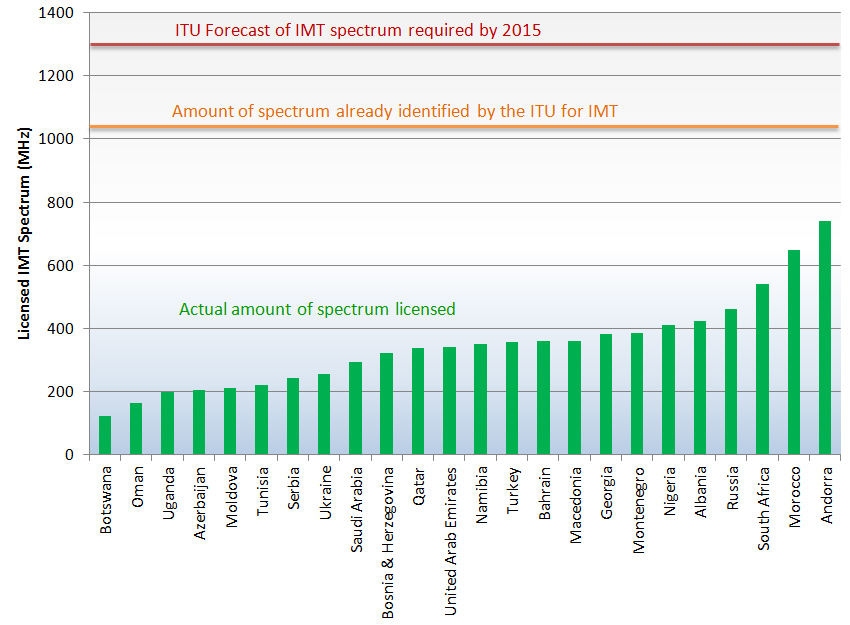 One of the primary arguments behind asking for more spectrum for IMT is that demand for mobile data is ever growing, and in order to satiate this demand, more spectrum will be needed. Despite the improvements in spectrum efficiency and capacity that are offered by LTE, it would be equally churlish of those not in the IMT community to refuse to admit that more spectrum will almost certainly be needed. There are a myriad of forecasts for just how much spectrum will be required and as PolicyTracker has reported several times, there is an equal amount of uncertainty about these forecasts.

What is clear, however, is that mobile operators are achieving greater capacity from less spectrum than historic forecasts predicted. If there is a lesson to be learnt here it is that these historic forecasts (e.g. those from the ITU) have tended to vastly over-estimate the amount of spectrum that is necessary for mobile services. Given this, and given the amount of already identified IMT spectrum that is yet to be made available by regulators, there remains a question as to just how much more will be really be required.

One criticism that regulators often cite when their woeful efforts in licensing already identified IMT spectrum are highlighted is that just because spectrum is identified by the ITU for IMT services, does not mean that it can be immediately licensed for such. In many cases this spectrum is already in use by other services, in particular broadcasting (for the 700 and 800 MHz bands) and government services (in the various bands between 1700 and 2400 MHz). This is undoubtedly true, however the differences in IMT spectrum availability can be large from one country to its neighbour. What makes one country able to clear these incumbent users from the spectrum but not another? It could be a number of things:

One, many or all of the above may be true, but, and here’s the rub, the exact same problems will apply to any new spectrum identified for IMT.

The GSMA has made it clear that they are focussing on four main frequency bands as their priority for new IMT spectrum:

All of these bands have strong incumbent users, with just as much influence, power and support as those using the other bands already identified for IMT, if not more so. All of the reasons that stop the already identified IMT spectrum from being made available for mobile services also apply to the proposed new bands. If regulators are unable to release the bands that have long been identified for IMT, what is to say they will do any better with these new bands?

The end result may just be a set of graphs which show that, of the spectrum identified for IMT, an even smaller percentage is actually licensed or in use. With more possible bands to licence there will be increased fragmentation over which bands are available in which countries, making the job of mobile equipment manufacturers increasingly complex as they struggle to incorporate even more variations into handsets. Cross-border interference problems will proliferate as some countries are able to make the bands available but others are not.

Surely the most sensible approach would be to focus on those bands already identified and for the IMT community to work with regulators and incumbent users to make them more widely available. Or at least to do this before holding out the half-full bowl and asking for a top-up?

PolicyTracker Blogs
The 5G spectrum coordination challenge seems bigger than ever for Russia's neighbours
6 GHz benchmark updated
Our new podcast: Spectrum Policy 101
As we ring in 2023, should we re-consider our approach to mmWave spectrum?
3.3—3.8 GHz and 700 MHz were the popular auction choices in the past quarter
More from blog...