The tragedy of the commons: tragically misunderstood?
Jan 30, 2016 by Martin Sims

Spectrum policy often seems to rely on a simplistic interpretation of the term, not realising that it is discredited in the disciplines where it was born.

The concept of “the tragedy of the commons” is gaining currency again as the industry debates the regulatory and commercial wisdom of allowing LTE access to the Wi-Fi bands via LAA  or LTE-U.

The term is often used as if it refers to a “known” which emerged from the study of land usage: the idea than commonly held resources go to rack and ruin. In fact the opposite is the case: in the disciplines where it has been studied it is widely viewed as discredited. In history there is little evidence of a tragedy and in economics the academic who challenged the concept won a Nobel prize.

Even the person who coined the term recanted. Modern usage stems from a 1968 academic article called “The Tragedy of the Commons” by Garrett Hardin. He argued that open pastures are inevitably overgrazed because adding extra cattle gives a large individual benefit to their owner, whereas the eventual environmental degradation caused by overstocking is shared by all users.

Privatise common land and the problem disappears: overstocking damages the landowner directly, so this incentive to inefficiency disappears. In the 70s and 80s this became a powerful argument for privatisation – particularly in developing economies – and was applied not just to land but also to industry and utilities.

In the spectrum world this argument claims that congestion will eventually make unlicensed bands unusable because individuals suffer only marginally as the problem intensifies.

Hardin was extending an argument made by the Victorian economist William Forster Lloyd in 1833 and used to justify enclosure of common lands in the UK. Enclosure was the practice of taking lands used by the public at large and giving or selling them to private landlords. This had been going on since medieval times but intensified from the 17th century onwards. 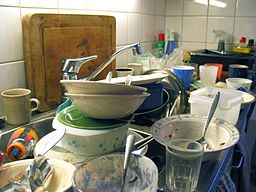 The kitchen in a student house: a poorly managed commons

So where is the evidence that overgrazing caused by common ownership leads to Lloyd’s famously “puny and stunted” cattle? In fact, there isn’t much. To paraphrase the historian E.P. Thompson, the problem with the “tragedy” argument is that it assumes commoners have no common sense.  Scholars like Neeson have documented how communities held special courts to manage the commons and prevent over-grazing. (i)

Furthermore, who would have the money to buy the additional animals to ruin the grazing for everyone else? The richer farmers who would have the most to gain from enclosing common land! Neeson presents evidence of the well-off being prosecuted for ignoring the rules of the common.(ii)

Historically, is the “tragedy of the commons” a myth? This probably overstates the case. Evidence presented by Neeson show isolated examples of badly managed commons but plenty of examples of good management.

Hardin himself recognised this and retracted his original thesis, conceding: “The title of my 1968 paper should have been ‘The Tragedy of the Unmanaged Commons’ ”

The economist Elinor Ostrom won the Nobel prize in 2009 for her re-examination of this debate, producing more subtle and convincing arguments based on the study of the management of natural local resources in developing countries. For her, it was the involvement of the local community that was the key to success.

What can spectrum policy learn from these debates in history and economics? Put simply, we shouldn’t regard “the tragedy of the commons” as an inevitability.

The evidence suggests common usage can be a tragedy if poorly managed or a success if well managed. This ties in with our practical experience: surprisingly little congestion has been found so far in studies of Wi-Fi usage. The international development community would call this an example of  Ostrom’s law – an allocation of resources that works in practice can work in theory – we should recognise this in the spectrum world too.