Controversy, compromise, and consensus: the latest World Radiocommunication Conference (WRC-19) at Sharm el-Sheikh had it all. Credit must go to the 3400 delegates from 165 ITU member states for their efforts not just over the four weeks of the conference, but throughout the preceding four years of preparatory studies and discussions. The result for 5G networks? An extra 17.25 GHz of millimetre wave spectrum, 85 per cent of which is globally harmonised. That’s not bad going for what some had described as the most difficult WRC agenda item in years. 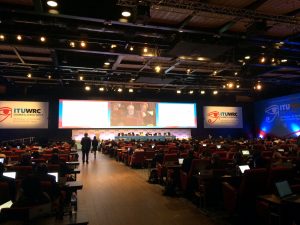 In the run-up to WRC-19, 26 GHz (24.25—27.5 GHz) was highly favoured for identification as a global International Mobile Telecommunications (IMT) band. However, disagreements over the appropriate harmonisation measures for 5G systems in the band ran deep. Divisions stemmed from polarised views on how to protect the Earth Exploration Satellite Services (EESS) operating in the adjacent 24 GHz band – providing scientific services such as data collection for predictive weather warning systems – from harmful interference by 5G base stations. At one end of the scale, Europe argued for very stringent protection criteria for EESS, while at the other the Americas favoured more relaxed out-of-band emissions limits for mobile equipment, to allow more of the spectrum to be used for 5G and spur 5G network development.

After four weeks of intense negotiations (and months of debate beforehand), WRC-19 delegates came up with a compromise that balances the interests of the EESS and 5G sectors. Under a new time-delay approach – dubbed “grandfather backwards” at WRC-19 – the out-of-band emission limit for 5G base stations will be set at -33 dBW/200 MHz until September 2027, while base stations deployed thereafter will have to comply with tougher restrictions (-39 dBW/200 MHz). This phased approach mitigates against the growing risk of aggregate interference that will come as 5G deployments increase.

The compromise reached at WRC-19 shows how dearly delegates valued the prize of achieving globally harmonised conditions for IMT in the 26 GHz band – as opposed to the likely alternative of regional fragmentation. The outcome should foster a vibrant global ecosystem for 26 GHz equipment, paving the way for widespread 5G deployment using this frequency. Significantly, the time-delay approach means there will be no need to replace early 5G equipment in the 26 GHz band as 5G networks become more densely deployed.

Nonetheless – and perhaps unsurprisingly, given the fierce debate even before WRC-19 – the meteorological community is disappointed at the 26 GHz resolution. According to the World Meteorological Organization, the decision could lead to nearly 10 times more interfering out-of-band emissions than it had recommended and leaves the future uncertain for critical national weather warning systems.

Somewhat less controversially, the entire 40 GHz range (37—43.5 GHz) also received a global IMT identification. Along with the 26 GHz band, 40 GHz had garnered strong support ahead of the conference. The US and Canada were prominent in pushing for an IMT identification, having already decided to award the lower portion of the band for 5G.

Airwaves in the 40 GHz band are heavily used by the fixed satellite service, although the exact frequencies vary around the world. As a result, countries will only deploy 5G services in the sub-bands they find most convenient. The US and Canada, for instance, are auctioning 37.6—40 GHz. Meanwhile, in Europe, that range is reserved for future high-density fixed satellite services (HDFSS), so any 5G deployments will be in the 40—43.5 GHz range.

50 GHz gains support under the radar

In a more surprising development, two frequency ranges around 50 GHz found favour for 5G among countries representing all three ITU world regions. While falling short of achieving a global IMT identification, 45.5—47 GHz and 47.2—48.2 GHz were each designated in country footnotes by a number of ITU member states. These frequency ranges only started to gather support in the months leading up to WRC-19 and, compared to the highly favoured 26 GHz and 40 GHz bands, had been little studied.

Somewhat controversially, China and Turkey objected to the increasing number of countries wanting to join these footnotes during WRC-19, due to the incumbent use by mobile satellite services. This led to a tense last-minute debate, in which a few countries, including the US, Norway and Togo, complained about China’s rigid position and described as unfair and unprecedented the situation that certain countries were unable to join a footnote. This led to calls for the ITU to review the mechanisms for adding countries to footnotes in future.

Another band receiving a global identification for IMT was 66—71 GHz. This range is eyed as both a Wi-Gig expansion band and a future home for unlicensed 5G (NR-U) systems. The importance of these frequencies for both Wi-Gig and 5G is reflected in the WRC-19 resolution, which invites the ITU’s Radiocommunication group, ITU-R, to develop co-existence measures for these and other wireless access systems.