Dynamic spectrum sharing (DSS) is being hyped as a key technology for mobile operators to deploy from 2020. Using DSS, they can run 5G and LTE at the same time in the same spectrum band, without the headaches associated with traditional refarming methods. In this blog, we look at why many mobile operators are backing DSS as an important enabler for their 5G network development. 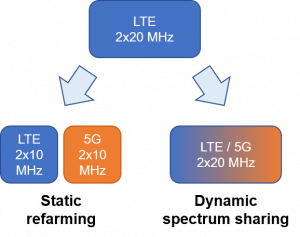 A significant advantage of DSS over traditional refarming is that operators don’t need to statically partition a spectrum band between legacy and new technologies—say, assigning 2 x 10 MHz each to LTE and 5G NR. Instead, DSS gives both technologies access to the full bandwidth (e.g. 2 x 20 MHz), dynamically balancing the spectrum resources between them according to the mix of LTE and 5G devices. Using DSS, therefore, avoids operators having to eat into the capacity available to LTE users—risking degrading their experience—when introducing 5G in the same frequency band. Once deployed, DSS intelligently manages the evolution from one technology to another. As 5G device penetration grows, so the proportion of bandwidth allocated to 5G automatically increases.

#2 Deployable as a software upgrade

For operators with 5G-ready networks, DSS doesn’t require any new hardware and can be deployed as a software upgrade. Avoiding site visits lowers the costs of deploying DSS, enabling 5G to be rolled out more rapidly and cost-effectively across a wide area. As many operators have already modernised their networks to prepare for 5G, they can benefit straight away from DSS’s deployment simplicity.

DSS is commercially available and ready to be deployed. Ericsson, Huawei, Nokia, and ZTE have all announced their versions of DSS, while Samsung’s solution is expected soon. Each vendor’s solution is designed to work with its own network equipment. Mobile operators are already starting to deploy DSS to expand their 5G networks and many more plan to do so over the coming year.

As DSS balances the spectrum usage between LTE and 5G on demand, operators do not need to wait until 5G handset adoption reaches a critical mass before they can roll out 5G in an existing LTE band. As a result, they can extend 5G coverage sooner and more broadly, with a minimal impact on their LTE subscribers. DSS can also be deployed in new spectrum to run LTE and 5G simultaneously, avoiding the dilemma of which technology to pick.

Early deployments are already showing that DSS can be a catalyst for achieving rapid national 5G coverage. By introducing DSS in an existing LTE low-frequency band, operators can take 5G nationwide much more quickly than any previous technology generation (which required new base station hardware). Swisscom has already demonstrated this, reaching 90 per cent 5G population coverage by December 2019 thanks to DSS.

#6 No need to wait for new low-band spectrum

Many operators don’t yet have new spectrum in the low bands for creating wide-area 5G coverage. In the past, this would have delayed them rolling out coverage on a national scale. Today, operators aren’t forced to wait for new spectrum (though they will eventually need it). They can start building out 5G coverage by running DSS in an existing LTE low band, and subsequently boost wide-area 5G bandwidth as new frequencies become available.

Another benefit of DSS is that it can help operators evolve towards 5G standalone networks from their initial 5G non-standalone deployments in mid-band or mmWave spectrum. Extending 5G coverage into the existing LTE coverage bands, alongside deploying the new 5G core network, allows new 5G services such as network slicing to be introduced quickly across a wide footprint.

For all the above reasons, we expect DSS to see rapid adoption among mobile network operators as they move from their early 5G deployments in the higher frequency bands to the second stage of 5G network evolution.

PolicyTracker’s Spectrum Refarming and DSS Dossier, included as part of our Spectrum Research Service, tracks all the latest developments relating to DSS, including operators’ deployment plans, within the context of the wider themes of legacy network closures and spectrum refarming.•