We put auction in context as prices pass an average of $1.82/MHz/POP

The FCC’s AWS-3 auction, once considered a sideshow before the repeatedly delayed 600 MHz incentive auction, has surprised the telecoms industry by attracting huge bids.

At the end of round 35 of bidding, a total of $37.5 billion had been offered for 65 MHz of spectrum in around 1.7 GHz and 2.1 GHz, which is equivalent to $1.82/MHz/POP. A glance at PolicyTracker’s Global Spectrum Database shows that the price marks a sharp rise from similar auctions in recent years.

Our crude calculation belies significant variations between regions and bands. For example, a 2 x 10 MHz J Block licence for the “NYC–Long Island” EA now costs $2.4 billion, whereas a different 2 x 10 MHz G block licence in “Louisana 9” CMA will only set you back $1,300.

These high prices have been generated despite the fact that the successful bidders’ uplink operations will be restricted to low-power transmissions, and that operators will have to obey sharing arrangements with the band’s incumbents.

For perspective, in March this year, the FCC held an auction of 2 x 5 MHz in similar frequencies (1915–1920 MHz and 1995–2000 MHz) which cleared at the FCC’s reserve price, the equivalent of $0.55/MHz/POP. Data from the Global Spectrum Database shows that these results represent a significant spike when compared to average global auction revenues for spectrum in similar bands (1800 MHz and 2 GHz bands).

If these results were this year’s average revenue from the bands then it would not only represent a significant U-turn in the behaviour of mobile operators, but would also plot a U-shape on our diagram. 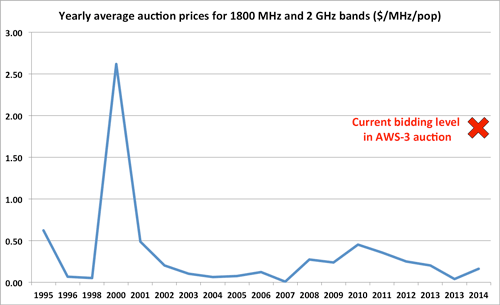