In the end, the US only persuaded a handful of countries to adopt its preferred policy. It auctioned the band two years later and the band seemed to slip off the spectrum policy agenda.

But the last year has seen something of a flurry of activity for the band. The closure of a merger between two US telcos may allow US satellite broadcaster Dish to put its extensive licences in the band to use for mobile. India’s government continues to flirt with an award of the band, a decision that could transform the economics of internet deployment in the predominantly rural country. In the last couple of weeks both Hong Kong and Saudi Arabia have announced planned awards of the band. 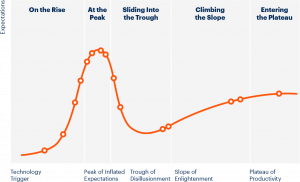 If one thinks about spectrum bands using the Gartner Hype Cycle narrative, then it appears the band has completed “technology trigger” and “peak of inflated expectations” during the run-up to the incentive auction. It then endured the “trough of disillusionment”, save for an auction in Canada, and is about to enter “slope of enlightenment”. But as noted by renowned spectrum policy expert (and PolicyTracker contributor), Pierre de Vries, the hype cycle myth, while useful for making sense of the world, appears to show discrepancies when compared to reality.

We will continue to monitor the band to see if it ever reaches the final stage of the Gartner hype cycle, the “Plateau of Productivity”.

Newly updated profiles of low-bands, including the 600 MHz band, are available to Spectrum Research Service subscribers.