The Netherlands’ centuries-long taming of the North Sea has made its people expert at civil engineering and social cooperation. But while it may be able to build cities and airports below sea level, it has not been able to solve another problem: how to allow satellite and mobile services to coexist at 3.3 – 4.2 GHz, also known as the C-Band.

The country is home to a major satellite earth station, operated by Inmarsat, which receives downlinks in the spectrum. Given the country’s flat topography, 5G services almost anywhere in the country could interfere with how the satellite system operates, it argues. As we reported this week, a legal ruling has put the Ministry of Economic Affairs’ plans to award the 3450 – 3750 MHz band on ice.

As our recently-published benchmark of the 3.3 – 4.2 GHz band shows, the Netherlands’ failure to award the band would put it far behind its European neighbours, almost all of whom have or are about to award at least the 3.4 – 3.8 GHz band. Some countries, such as the UK, where Inmarsat is based, have even made the entire 3.41 – 4.2 GHz band available for terrestrial services, although only spectrum below 3.8 GHz is available for nationwide licences.

The data is summarised in an interactive map illustrated below. 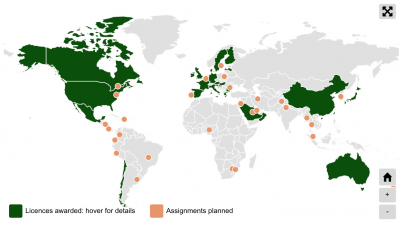 The 3.3 – 4.2 GHz benchmark is available to Spectrum Research Service subscribers.