More information about GPWv4 and links to download its 9 data sets can be found on NASA’s Socioeconomic Data and Applications Center (SEDAC) website. Details about the basic methodology and data collection techniques used to create GPWv4 are given in this document.

How the maps are made

The precision and accuracy of a given grid cell (pixel) is a direct function of the size of the input areal unit (administrative area). For nations with large input units, the precision of the population values assigned to individual grid cells will be lower compared to individual grid cells with a smaller input unit.  Therefore, for precise analysis, study areas should be larger than input areas contained within it. To allow users to do this, global mean size (km2) of input areas is provided at ~1km resolution as ancillary data, and can be downloaded here. To ensure the highest possible level of precision, population estimates were made only for countries where the size of our study areas (the area covered by each population density category) was larger than the mean size of input units within it.

How the data was used

How one defines an area as either rural or urban and everything between is debatable; however, a colloquial and indicative description of the population density classes is given in the table above. 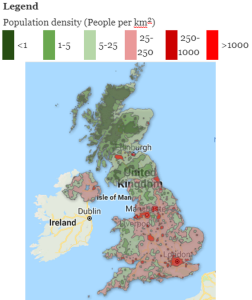 Using this as a guide, it is possible to understand the general population density distribution for a given country. For example, the population density map for the United Kingdom shown on the right highlights the more populous south compared to northern Scotland.

The interactive maps shows the spatial distribution of the six classes of population density per country. However, due to the complex nature of some national data and to allow faster loading, most maps have been smoothed using GIS to show the general spatial population density distribution for each country. The resultant map was exported into Google fusion tables via Shape Escape, where it was made interactive and published to the website.